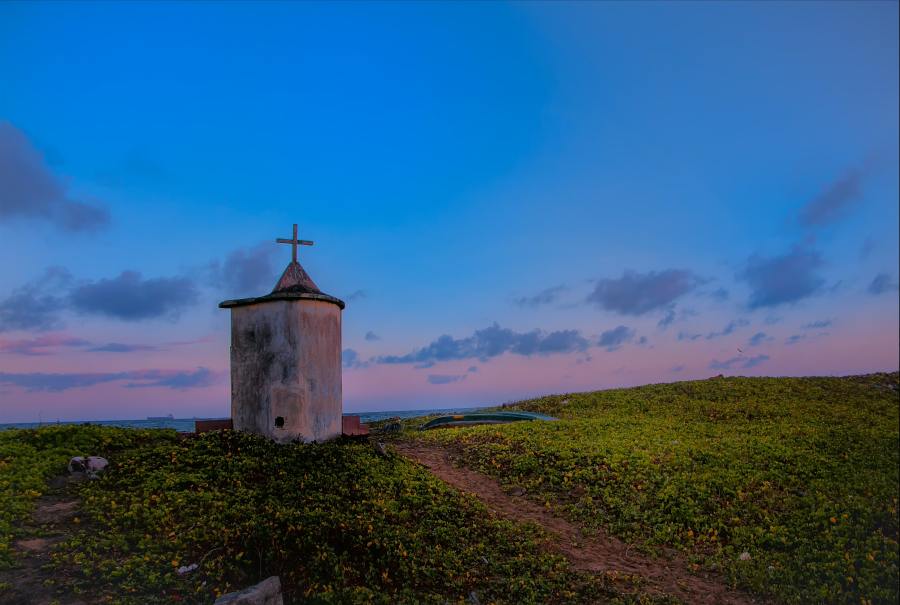 A friend recently said, “All religious groups have their thing.” And I think what he meant was that each system of belief has something that sets it apart from the others. Some require this and others prohibit that, and some accept a certain teaching while others reject it, but they are all unique in some self-defining way . . . in other words they all have their thing.

So what it is that makes Christianity unique? What does it have that sets it apart from every other group? Is it a rule or requirement or ritual? Is it some high moral standard or other lofty obligation that must be met? Simply put, the central and defining feature of the Christian faith is the Gospel. And that naturally leads to the question of just what is the Gospel?

The word Gospel means good news, or good telling, or good story. It is something you should want to hear. On a basic level, all religions provide a means for people to get right with God. But the Christian faith is different in that instead of telling you what to do, the Gospel tells you what has already been done. Instead of instructing you on how to achieve favor with God, it tells of the One who has achieved favor on your behalf. Instead of placing a heavy burden of duty upon your back, it lifts the requirements of human endeavor and replaces it with the perfect work of Jesus Christ. The Gospel is the good news that Jesus saves sinners.

Good news is only good if there is an identified problem. The message that, “You are cancer free!” means little to the average person on the street, but it means everything to the patient sitting in the oncology office who has been battling that horrible disease. For all human beings, the bad news is that we are separated from God because of sin. Sin is not simply what you do, it is who you are, and it is who I am. We are born this way. Our default setting is bent toward ourselves and our own desires, not toward God. The bible says that we have all strayed from God and seek to rule as the final authority over our own lives. We have turned from the One who created us to worship something else. And because we have rebelled against Him we are subject to the consequences of our actions. The bible describes those consequences as the wrath of God.

As I wrote in “A Most Audacious Claim” this assault on human goodness is offensive to us. One of the greatest stumbling blocks to the acceptance of a Christian worldview is the teaching that people are not naturally good. From our perspective we feel pretty good, especially compared to the creepy bad people we hear about in the news. In general we want to be good and we feel basically good and therefore the Gospel can often fall on deaf ears as we do not recognize our own helpless situation.

Bur regardless of our perspective, God tells us that we are in need. According to His perfect standard, no one measures up and human achievement alone can never satisfy His requirements for perfect holiness. So if that is true, what is to be done? We are separated from God and we cannot earn our way into His favor. Our circumstances are dire and our hearts are desperate as we begin to realize there is no way out.

The Gospel is so good because we are so utterly lost on our own. Like a ship on the horizon is good news to weary souls adrift on an endless sea, the Gospel provides rescue to the lost. With the fatigue of rowing comes the failure of hope as the lost sailors realize they cannot save themselves. They are completely dependent on something outside their own strength to bring them back home. They are desperate. They are as good as dead. Until they see it . . . the hope on the horizon. The ship that will bring them home. The rescue has arrived and they did nothing to earn it.

On our own we can never satisfy God’s standards. But there is One who did. Jesus was born perfectly sinless (the Virgin Birth) and He lived a life pleasing to God in every way. At no time did he stumble, fail, or fall. He lived the life we could not. He is blameless before God. He is the star pupil in class, minus the arrogance and pride, who wrecks the curve for everyone else by earning a perfect score in life. But unlike that kid you may remember from class, Jesus offers to swap grades with you. He offers to take your failing grade and replace it with His perfect score. He offers to take the consequences of your shortcomings in exchange for the rewards and benefits that His life has earned.

On the cross Jesus suffered and died, bearing the penalty and shame that you and I deserved as a consequence for our rebellion against God. In other words He took our place. And it was not because we were worthy. On the contrary, it was when we were self-declared enemies of God that He loved us. He looked with love upon the condemned and said take me instead. But His death on the cross is not the end of the story. On the third day He rose again, alive and victorious over sin and death. God now sees those who accept Jesus exactly as He sees Jesus – blameless. If you have put your faith in Jesus, when God looks at you, He sees the perfect life of Jesus. You are no longer condemned to die, but instead redeemed to new life. And not just any life, but as an heir with Jesus to all of the goodness that God can imagine for all of eternity.

But who can be saved?

Because we are so programmed as performance based individuals in W estern culture we still wonder what we must do. We think about ourselves, “I’m not good enough.” or about other people “He’s definitely not good enough to be saved.” The point of the Gospel is that nobody is good enough to be saved. Nobody. Not one. We cannot do it. We need Jesus. Without Him as our Savior, there is no hope of redemption. And because the work has been done entirely by Him there is no room for boasting except in that which points to Jesus.

But salvation is not automatic. Just because the lost sailors saw the ship does not mean they were rescued, only that an opportunity for rescue was on the horizon. They still had to accept rescue by climbing aboard. It is possible, although kind of silly, to imagine one of the sailors rejecting the rescue ship because it did not meet some of his expectations or because he was not able to captain it. But unfortunately, that is what many do with Jesus today. Though He offers the free gift of salvation to any who would believe in Him many choose to stay where they are, as kings and queens of their own little kingdoms, too caught up in themselves to see the darkness that will soon consume them. Jesus does not force Himself on anyone. He offers a gift . . . a free gift great beyond all understanding. He offers us Himself because He loves us. That is the Gospel. It is the gift of Jesus that leads to reconciliation with God and life eternally in His presence. It is the power of God for everyone who believes, and may your heart be opened to believe.

2 thoughts on “What Is the Gospel?”