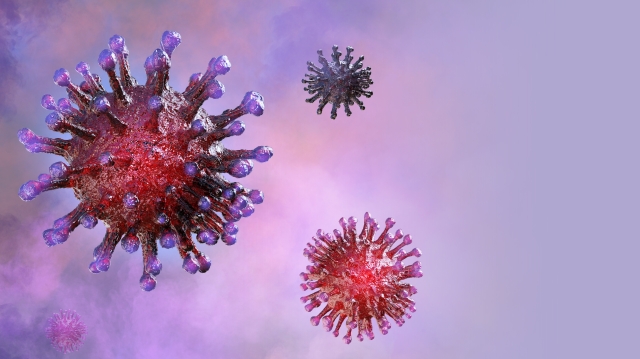 What if you could see the COVID-19 virus? Instead of an invisible threat mysteriously lurking around people, places, and things, what if the coronavirus was plain and obvious to the naked eye? One of the most disconcerting feelings during a viral outbreak is the unknown. Where is the virus now? How is it spreading and to whom? How careful do I really need to be? Because of the many unknowns, you may wash your hands thirty times per day at work when in fact there is no coronavirus within 10 miles of your location. On the other hand, you may walk into a grocery store that is infested with infected individuals and contaminated surfaces and never fully realize the threat surrounding you. But what if you could just see it? Instead of wondering and wandering as if in the dark, what if your eyes were opened to the unseen reality around you? How would that change the way you lived?

Imagine COVID-19 visible as a red glowing light. Think what you might experience on any given day during this current outbreak. While climbing a flight of stairs, you see it on the handrail and move cautiously to the opposite side. You see it on the handle of a door you are about to open and turn around to find an alternate entry. Everywhere you go, the virus seems to have gone before you. That red glow is on your keyboard at work, on your cell phone, on the debit card PIN pad, and on the hand extended out to you in greeting (including the knuckles and elbow). It completely surrounds an infected individual as red plumes of contagion billow widely from a hacking cough. It’s a frightening visual isn’t it? But before your anxiety spikes any higher or you begin double checking the number of toilet paper rolls in your bathroom, consider what you don’t see. Being able to identify the presence of the virus means that you can also identify its absence. You know who is not infected. You know what surfaces are clean and pose no threat to you. You also know what places to avoid and where you can go with no worries. Seeing the reality of the coronavirus could cause a terrifying anxiety, or maybe a bold confidence. It depends on your perspective. One thing is for sure, it would change your behavior dramatically as you attempt to avoid infection.

Unseen realities affect our lives daily. A virus is just one example. As a Christian my worldview affirms that there is more to life than meets the eye, and I frequently find myself pondering the unseen. There is more to this world than the material and readily tangible reality. A spiritual realm exists that lies beyond our natural ability to see. And those spiritual forces are not “out there” somewhere, sequestered in heaven or even hell, they are ever-present and close at hand, just as close as a viral outbreak. If we could see, even for a moment, the spiritual reality that encompasses us it would at once amaze and terrify. A powerful example is found in the Biblical story of Elisha who was alone with his servant on a mountaintop surrounded by the army of the Syrian king who sought to kill him. When the servant saw their predicament he said, “Alas my master, what shall we do?” Elisha responded, “Do not be afraid for those who are with us are more than those who are with them.” Then Elisha prayed that the young servant’s eyes would be opened to see the host of fiery horses and chariots that stood in their defense . . . and he saw (2 Kings 6:15-17). And seeing changed his life. Okay, I added that last part but it is reasonable to assume that after an encounter like that he would never be the same. His perspective on the material world would be forever changed because his eyes were opened to a new reality.

Likewise, Christians are shown that our primary battle does not take place in the visible world.

The rulers, authorities, and cosmic powers here refer to spiritual forces that seek to damage and ultimately destroy the image of God in the creation. And where does that image reside? In human beings. There is a great battle raging for the souls of men and women as the evil one seeks to plunge people ever deeper into the present darkness that envelops our world. A glimpse of that reality would surely produce an unbridled fear that would make the coronavirus look like Disneyland. Or would it? It depends on your perspective. You see, a child of God has nothing to fear from spiritual darkness. Those forces have been soundly defeated by the sacrificial death and resurrection of Jesus Christ. They have no power over a believer in Christ. Instead of a terrifying anxiety, the one who has faith in Christ has a bold confidence. Why? Because, like Elisha, those who are with us are more than those who are with them. “He who is in you is greater than he who is in the world” (1 John 4:4). The child of God has Jesus, the champion of all creation, and His heavenly host standing between him and anything that would seek to bring harm.

A pandemic illness is a frightening problem. But at its worst a virus can only destroy your body, it has no power over your soul. The spiritual forces that wage war against you are not so kind. They have little interest in whether you remain healthy in your physical body or not because it is passing away. Even in the best of circumstances your body will not last forever. Instead they aim to harm the eternal part of your being by blinding you to the truth of God’s love for you. They would see you separated forever from the God who sent His Son to die for you.

“In their case, the god of this world has blinded the minds of unbelievers, to keep them from seeing the light of the gospel of the glory of Christ, who is the image of God” (2 Cor 4:4).

How would your life change if the spiritual world became real to you . . . if you could see it with your own two eyes? Would you be moved to seek out the God who loves you more than you can imagine? Or would you carry on with your life as usual like one who could see COVID-19 but takes no steps to avoid it?

As for those who do believe: What if we could see the forces that try to blind others from seeing Christ? What if we could engage in the battle to defeat the spiritual forces of darkness? While not many of us will see with eyes like the servant of Elisha, we can see with our hearts as we trust what God’s Word has revealed. And we can powerfully join in the fight as spiritual warriors when we pray for God’s purposes to be accomplished in the world and in the lives of the people we care about.

So seek to see the unseen. We cannot see COVID-19 but we can begin to grasp, at least in part, the spiritual reality around us. And that reality should change the way we live in a powerful way.

Just because our current bodies are passing away does not mean we should neglect to care for ourselves and others. It is right to make every effort to remain healthy by washing hands, getting rest, staying home when sick, and so on. Engage in prayer for the needs of your community and serve when able. But don’t lose sight of the eternal perspective. Remembering spiritual realities has helped me keep things in context, I hope it has helped you as well!

3 thoughts on “Unseen Realities: A Christian Perspective on COVID-19”