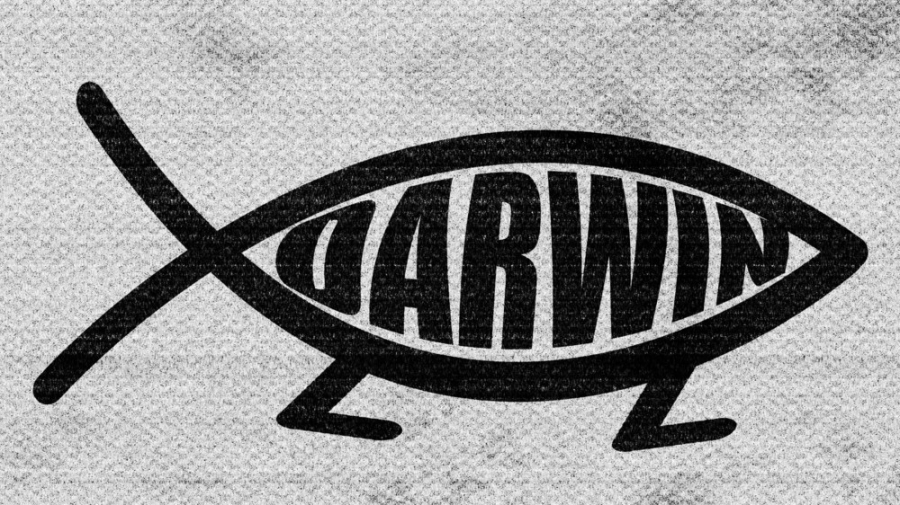 Why does this symbol exist? What is significant about a crude image of a fish that seems to have grown some awkward legs? When you add the name “Darwin” the answer becomes clear; fish plus legs plus Darwin equals evolution. According to that theory, life began in water and then over an immense amount of time those creatures sprouted legs and moved onto land and then eventually became you and me. It is a picture that summarizes evolution quite well. That is what the symbol means, but that does not answer the question of why it exists. Anyone who pays attention to bumper sticker culture knows the answer. The Darwin fish was not a primary invention, but a response. It was a rebuttal and a rebuke. It was designed to counter and shoot down the meaning behind a different fish, one without legs, and one that represented a worldview diametrically opposed to its own. The Darwin fish exists to provide an alternative to the other fish, supposedly a more enlightened, whole, and scientific option to appeal to the modern and educated mind.  Just what is this other fish? Obviously it is the Ichthys otherwise known as the Christian fish.

Ichthys is simply the Greek word for “fish” and when drawn as a symbol it has long been associated with Christianity. Dating back to the first century, early Christians used the Greek letters of the word to create an acronym or acrostic to represent their faith, Iesous Christos Theou Yios Soter, meaning Jesus Christ, Son of God, Savior. During times of intense persecution it is thought that believers may have used the symbol to identify one another in a discreet fashion. For instance if a Christian met a stranger on the road he might draw the first arc of the fish symbol in the dirt. If the other person completed the second arc of the fish that would mean he or she was also a follower of Christ and they could then have fellowship without fear of persecution.

Today we see the fish in the form of bumper stickers, business ads, jewelry, and even tattoos. Second only to the cross, it may be the most widely recognized Christian symbol in the world. Just like in the first century, it provides believers a symbolic way to display their faith. In short, the fish represents Christianity and Christianity, when understood as a worldview, tells us who we are, where we came from, and where we are going. As an image on your car, jewelry, or body it communicates to those around you what you believe about the important questions in life.

Of course, like any viewpoint, it is not shared equally by everyone. In fact, believe it or not, there are those who are very opposed to the Christian view of life. That is where the Darwin fish comes into the picture. Not to be outdone by the Christian fish, those who hold to an evolutionary worldview attached legs to the fish symbol to contradict its message that God created life replacing it with the idea that life evolved from randomness. I hope we can see the distinction clearly; the two fish, one without legs and one with legs, each represent opposing worldviews. They are opposites. The Darwinists know this very well and that is why they came up with the legs in the first place. They were not trying to reconcile Christianity with evolution, they were trying to replace it.

“Evolution is promoted by its practitioners as more than mere science. Evolution is promulgated as an ideology, a secular religion—a full-fledged alternative to Christianity, with meaning and morality. I am an ardent evolutionist and an ex-Christian, but I must admit that in this one complaint—and Mr [sic] Gish is but one of many to make it—the literalists are absolutely right. Evolution is a religion. This was true of evolution in the beginning, and it is true of evolution still today.”

‘… Evolution therefore came into being as a kind of secular ideology, an explicit substitute for Christianity.’

With this statement Dr. Ruse provides a rare glimpse into the heart of evolutionary theory. At it’s core it is a replacement theology for the Christian faith exchanging belief in God for belief in nature and its laws.

So what should we think when a group of Christians begin to promote evolution as a theory consistent with traditional Christian belief? Consider an organization like BioLogos who promotes their website by stating:

“BioLogos invites the church and the world to see the harmony between science and biblical faith as we present an evolutionary understanding of God’s creation.”

There are certain words that just don’t make sense together. We call them oxymorons and they are represented well by things like vegan hotdogs, jumbo shrimp, deafening silence, unbiased opinion, random design, and yes, evolutionary creationist.

If Christians accept an “evolutionary understanding of God’s creation” then what is to stop us from adopting the Darwin fish as our new symbol?

As ridiculous as that sounds, it fits perfectly with the mission statement of BioLogos. Christianity and evolution are mutually exclusive worldviews with the latter being promoted and understood as an alternative eliminating the need for God in creation.

Space and time prohibit me from going into exhaustive depth as to why these two worldviews mix about as well as oil and water but a few simple points may suffice.

Both sides lose if we attempt to blend evolution and Christianity. Christians lose the teaching of original sin, salvation doctrine, the persons of Adam and Noah, the holiness and goodness of God (because He used death to create), and Scriptural authority. Darwinists lose random chance, secular humanism, survival of the fittest, moral ambiguity, determinism, and scientific authority.

Above and beyond all that, both sides lose their fish bumper stickers!